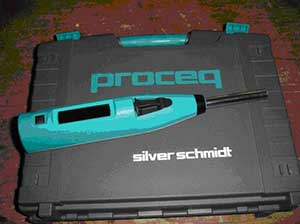 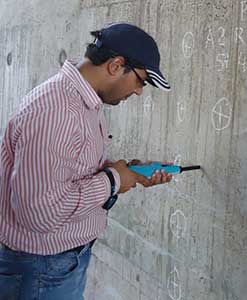 A Schmidt hammer, also known as a Swiss hammer or a rebound hammer, is a device to measure the elastic properties or strength of concrete or rock, mainly surface hardness and penetration resistance. It was invented by Ernst Schmidt, a Swiss engineer. The hammer measures the rebound of a spring-loaded mass impacting against the surface of the sample. The test hammer will hit the concrete at a defined energy. Its rebound is dependent on the hardness of the concrete and is measured by the test equipment. By reference to the conversion chart, the rebound value can be used to determine the compressive strength. When conducting the test the hammer should be held at right angles to the surface which in turn should be flat and smooth. The rebound reading will be affected by the orientation of the hammer, when used in a vertical position (on the underside of a suspended slab for example) gravity will increase the rebound distance of the mass and vice versa for a test conducted on a floor slab. The Schmidt hammer is an arbitrary scale ranging from 10 to 100. Schmidt hammers are available from their original manufacturers in several different energy ranges. These include: (i) Type L-0.735 Nm impact energy, (ii) Type N-2.207 Nm impact energy; and (iii) Type M-29.43 Nm impact energy.

The Schmidt concrete test hammers can be applied on all concrete structures such as bridges, buildings, retaining walls, barrages and many more. But they are also the perfect instruments to test in tunnels (e.g. the formwork stripping strength which is the concrete compressive strength fc to be achieved before removal of the formwork).

TILT – Tilting the device means that you raise the left side (plunger side) of the device to scroll to the icons to the left of the “centered” icon or you raise the right side of the device (SELECTOR button side) to scroll to the icons to the right of the “centered” icon.
ROLL – Rolling the device means that the device remains in the horizontal position, but the display is rolled away from you or towards you. ○ SELECT - Press the SELECT button. ○
TIP – Depress the plunger a short distance, but not enough to trigger it. ○
IMPACT – Depress the plunger until it triggers.